It's Basketball Time in Tennessee

The past couple of weeks have flown by and I haven't been blogging. We chose not to go to Waco last week end for the A&M/Baylor game...Mike didn't want to see A&M get beat again! And he would have done so since Baylor won 41-21.

Instead, we were able to watch Rheagan play in a pre-season elementary basketball tournament and her team was the tournament champion. 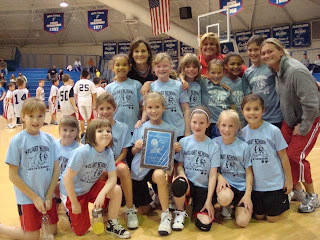 The Cleveland High School Lady Raiders began their season Thursday night with a win over the Baylor School from Chattanooga. (Picture can be added tonight after their 2nd game.)

Last night we went to Chattanooga to see the Lady Vols play the Lady Mocs. Neither of the programs are up to their ususal high standards but it was a good game.

The half time was probably the best...Quick Change from America's Got Talent preformed and even though we were sitting in the second deck and could see "in" some of the props, we still couldn't figure out how they did it!

It's alway good to see Pat "at work".
Rheagan got a lilttle closer for a better look.

Glad Rhea is looking better than she felt in this picture!

Mack does have on orange!!! Guess it doesn't count when it's not football :)