A Week End in Texas

We have spent the past few days in Texas visiting the the #1 daughter and the 2 Texas grandsons. the SIL was in Washington, DC for a Cotton Council meeting and other meetings. while we were there, we took in a high school basketball game.
On Saturday, the boys walked their pigs to get them ready to take to San Antoni0 tomorrow. This is the biggest barrow (pig) show in the country. There will be some 6000 pigs at this show.
The mother helped with the brushing and general loving on the pigs.

After the boys played and won their basketball games, ( they didn't get to choose the color of their shirts!)

they walked the pigs again. This is to help the pigs lose some weight and build up some more muscle.

Sunday, we went to church, out to lunch and then the SIL flew in. The boys walked the pigs again before the #1 grandson and his father cooked some delicious rib eyes with a blue cheese crust on top. The #1 daughter fixed some wonderful new potatoes and a spinach salad.

This morning we flew back to Birmingham and then drove to Cleveland.

The Season Came to a Halt

The past few days the Stuart Elementary Lady Bulldogs have been participating in a post season double elimination tournament. Having an undefeated season,they drew a bye for the first round,won in the second round, lost in overtime(to their chief rival) in the third round that sent them to the loser's bracket. They won the loser's bracket finals that put in the championship finals tonight ...again against their chief rival. They lost 18-16 tonight to end a season that exceeded all expectations.
Here's a picture of the Lady Bulldogs that was taken after the game tonight. 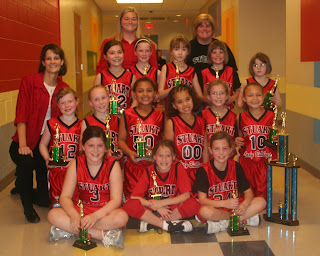 What a Difference a Week Makes

Look back a couple of posts and see what it looked like in our backyard a week ago today. Cold...snowing... but pretty. 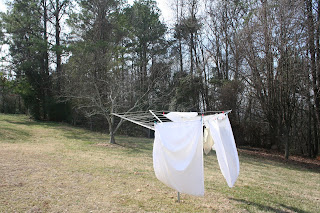 After the big snow on Monday, we have continued to have cold and windy days.

This morning we woke up to 11 degrees at our house. (I tried to post this this morning before I headed out, but the computer was feeling the effects of the cold weather and just couldn't get started!)

This afternoon it has warmed up all the way to 36 degrees! Wow, that sunshine sure did help. This is better than yesterday when it never got out of the 20s.

We should see warmer temperatures in the coming days; in fact, Mike is playing golf tomorrow about mid morning after it gets above freezing.

It's real hard to show a picture of cold except for the cat's frozen water dish and I didn't think that it would be too interesting.
Posted by Mary Helen at 2/05/2009 04:17:00 PM No comments:

Boy, did the weathermen miss this one today! It started off at 42 degrees this morning and wasn't suppose to freeze until after dark with light rain during the day. Well, by mid morning we had snow flurries, the temperatures dropped to 32 degrees, the flakes got bigger and heavier, and it has continued until early afternoon. Schools were closed at noon so I'm sure there will be lots of snowmen around town this afternoon.

This is how our yard looked like around 1:00 this afternoon. 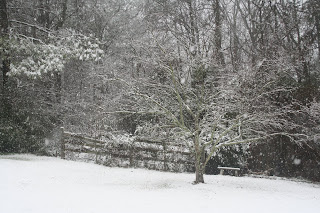 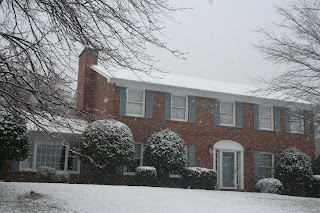 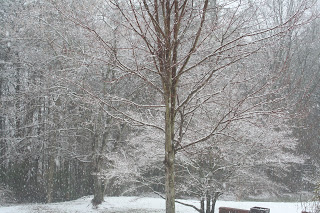 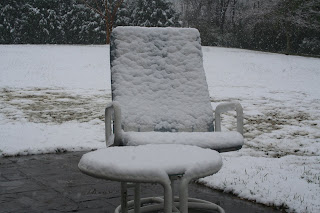