Our nights sleep at the hotel in Flagstaff was interrupted often by the passing of trains. We were staying on Route 66 and the train tracks were across the highway! At least one of the trains was an Amtrak that stopped at the train station a couple of blocks away. 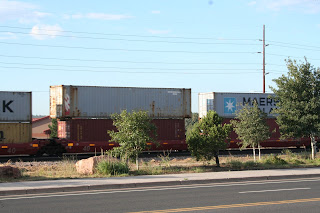 After a full breakfast, including grapefruit halves, we hit the road! Our first stop was the Meteor Crater where a meteor some 150 feet diameter and weighing several 100 thousands of tons, crashed into the earth 50,000 years ago. It struck with a force of 20 million tons of TNT. The crater that remained is 700 feet deep and over 4000 feet across. On display was a piece of the meteor that was found. 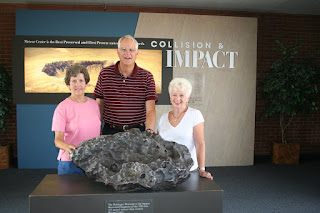 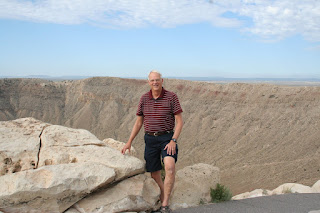 Next we went to Winslow, Arizona and relived the Eagles song Taking it Easy. This is a town on Route 66 that is living in the past. How long will many of us hang on to the 50s and 60s? 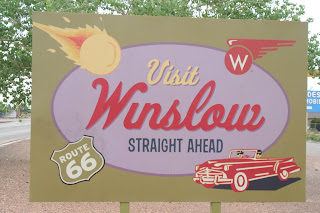 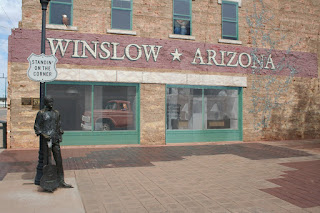 As we drove through Holbrook on our way to the Petrified Forest, we found this great little motel and its interesting rooms! 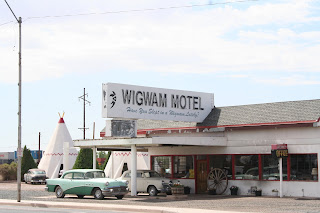 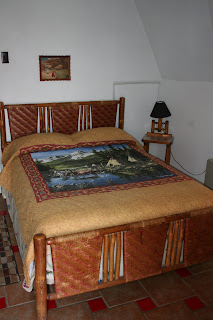 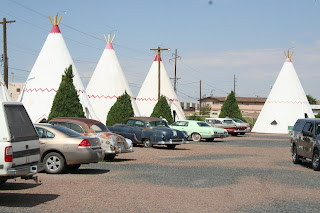 At the Petrified Forest we arrived just as a Ranger was beginning his talk, so we listened and learned what he had to share. This high, dry grassland was once a vast floodplain with many streams and rivers. There were large trees, giant amphibians, small dinosaurs and Crocodile-like reptiles and many ferns and other plants that lived here. When the trees fell, a mix of silt, mud and volcanic ash buried the logs and the oxygen was cut off and the decay process slowed. Silicia replaced the original tissue of the trees and became crystallized and the logs were preserved as petrified wood. All of this happened over 225 million years ago; the continents moved to their present positions and this region was uplifted. 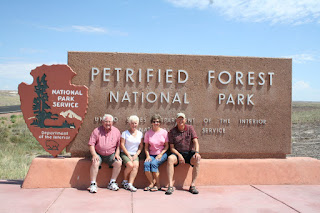 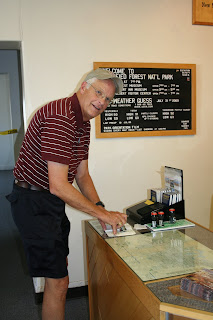 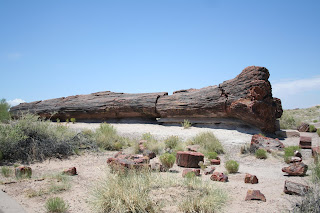 The Painted Desert is a pretty, but desolate part of the country where the sun and clouds determine the view that you see. 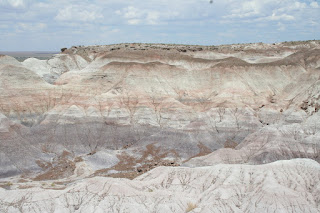 When we left there, everyone was hungry so we stopped at The Apple Dumpling restaurant in Chambers…which seemed to be nothing more than a post office and this place to eat. An Indian mission church was next door. The owner, waitress, cook and chief bottle washer was a delightful lady to visit with. I’m sorry that we didn’t get a picture with her. 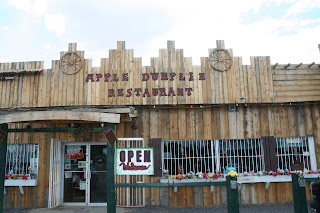 We stopped at the Continental Divide. 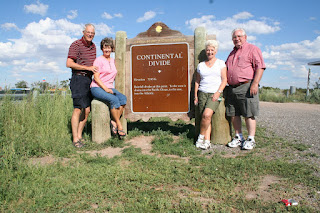 We drove to the hotel in Flagstaff, unloaded and then went to Old Town where we shared a plate of chicken nachos and then we ate about 2 sopapillas(sp.?) apiece. We did a little shopping, went back to the hotel and hit the bed. 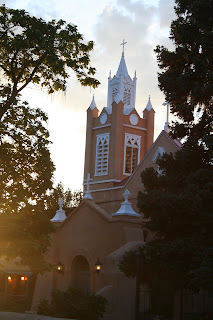 What a really, really interesting day. Your first comments about the railroad reminded me of when Lucy & Ricky Ricardo went to California and stayed at that motel where the trains passed by all night long.

I love how you can remember so much about the talks you heard. It sounds like the forest guides present it all from an evolutionary standpoint without any regard to creation.

Isn't it fun how so much of our social culture is still preserved in the small towns? I think you have been on a wonderful vacation trip!

Kelly- Thank you for the bonus points!! We need them!!