We had the great opportunity to attend the Atlanta NASCAR race last Sunday. This was a wonderful chance to see the race from a unique perspective. M & K have a good friend who is a sales rep for the trailers and buses that the drivers use and he was kind enough to get us Hot Passes. This allowed us to not only go to the pits and garages before the race but we were also able to be in the pit area during the race.

After getting our passes, we were ready to WALK!! 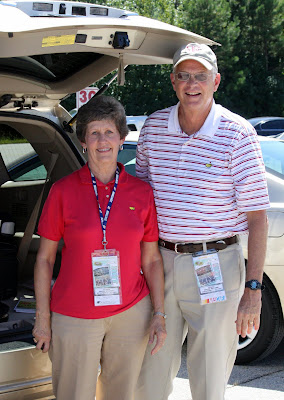 Our first stop was getting souvenirs... 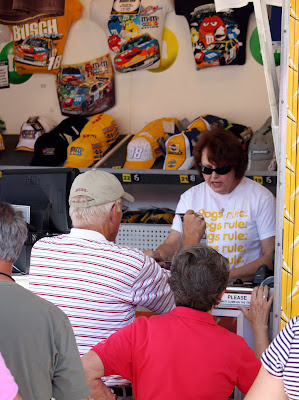 When we were at the merchandise trailers, there was entertainment...these guys were real dare devils! 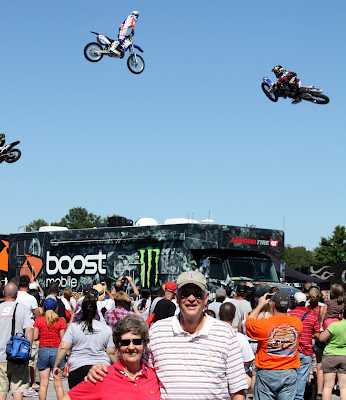 I think that maybe we were the only people in this parking lot that did not have a tent for tailgating. 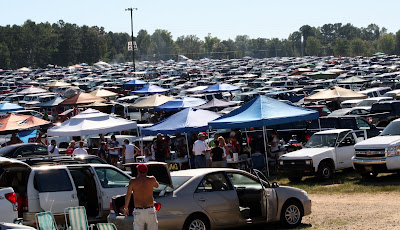 We are still outside the track. We were walking back to the car to put stuff away and get our ear protection. 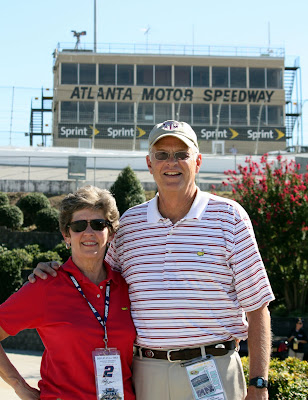 After we got inside the track, we ran into some friends from Cleveland as were walking around in the pit area. 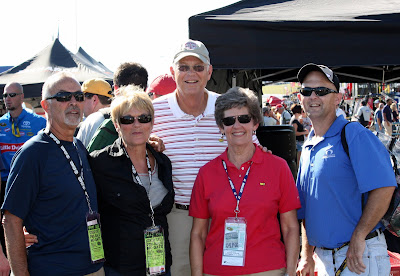 Some of the pit crew were gluing on the lug nuts. 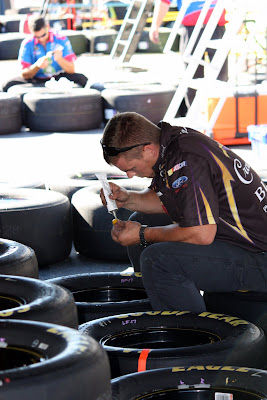 We we got the the garages, we found this crew stretching. 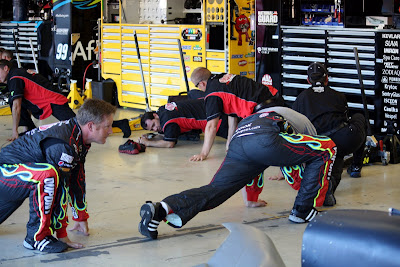 This is the Speed Network, and other networks as well, reporter; he had lots of make up even in the heat. 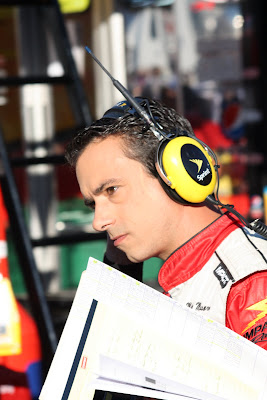 We were on our feet from 3:00p.m. until 10:00p.m. Lots of other people were doing the same...there's no place to sit and rest in the pits and garages. We were hoping one of the drivers would invite us into their trailers, but none did!

As it got closer to race time, the drivers began making their way to their cars. I would tell you who these guys are, but I didn't know them all, so you can guess who they are! 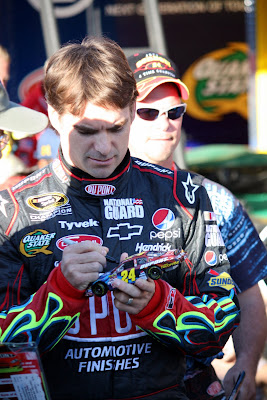 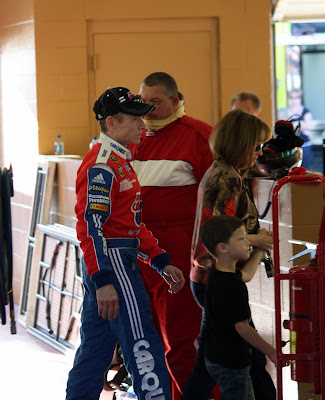 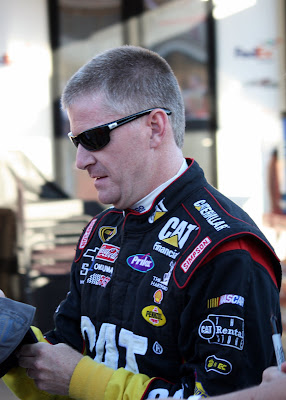 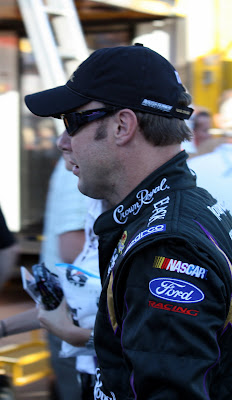 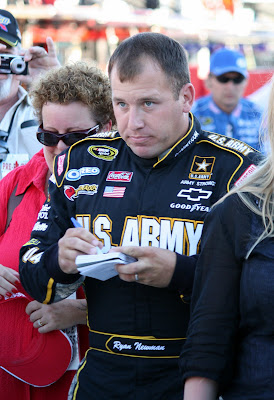 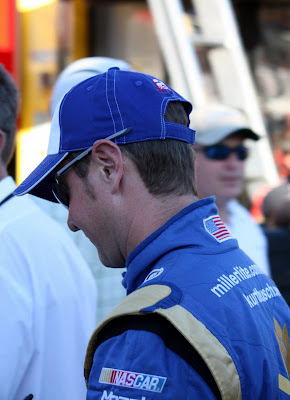 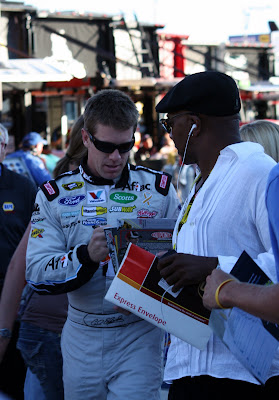 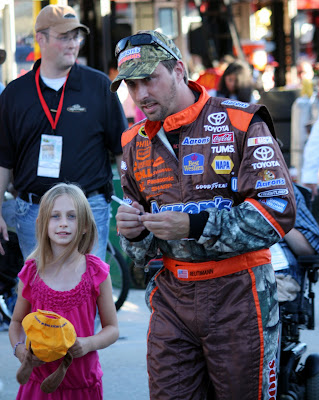 After the drivers are introduced, they ride around the track in a truck waving to the crowd. 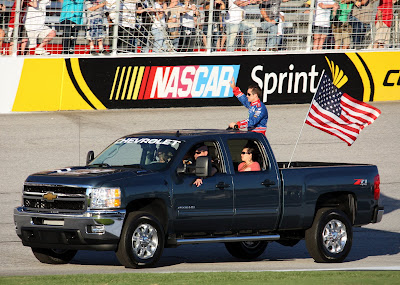 Getting to sit on the wall of pit row! 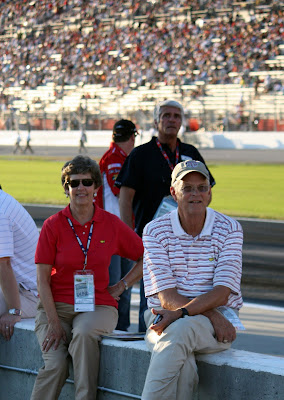 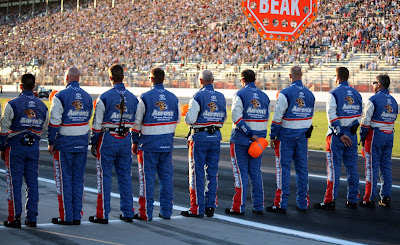 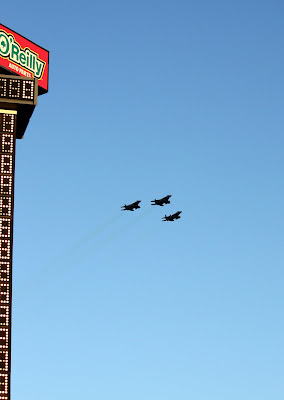 High 5's all around 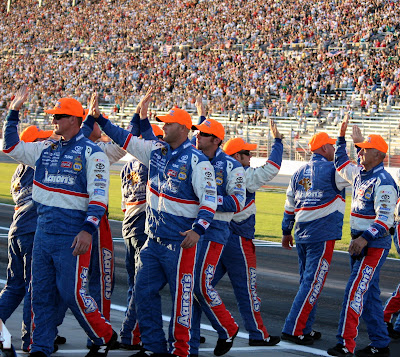 We didn't have a good view of the starter and his green flag but this says it was time for the race to begin . 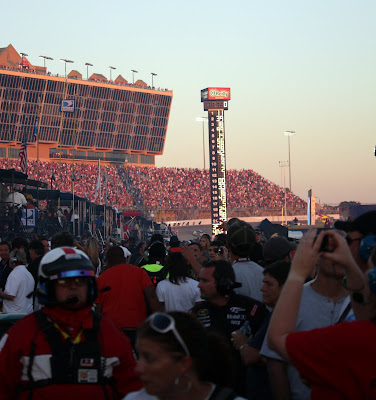 Not only is it loud, but you could feel the roar of the cars in your chest. The smell of burning rubber added to another sensory experience.
The blurry car was all that the camera was able to pick up and that's about what we saw as well. 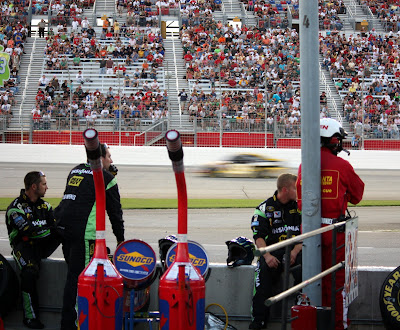 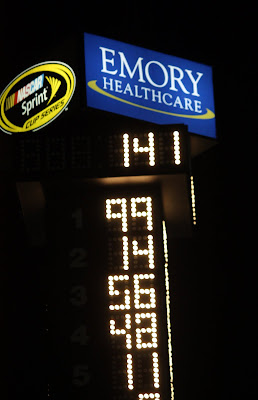 so we decided that it was time to head home! What a wonderful experience we were able to enjoy. 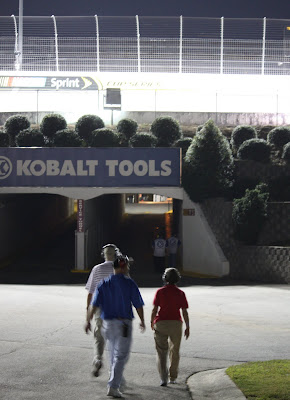 Um, Hello? Where was Kevin Harvick?

Great pictures and very interesting commentary. Your views on a new experience probably saw things that the "regulars" take for granted. . . . now about those motorcycle dare devils - - - what possesses anyone to fly on a vehicle meant for land use? Seems like a parachute or air bag should be around somewhere!

The garages face 2 directions and his was on the other side. If we had been on that side, we would have seen completely different drivers!