We are home, safe and sound, so now we can finish the description of our trip.

We docked at the island of Rhodes, and were off the boat and on the way to a day of sightseeing. We drove through the ancient port of Rhodes as we were leaving town. At the port we went by the location of one of the seven wonders of the ancient world: The Colossus of Rhodes. It was a giant statue of Rhodes favorite god, Helios. The bronze statue took 12 years to make and was finished about 292 BC. It was made of bronze, and some 110 feet in height. A strong earthquake in 226 BC badly damaged the statue. For almost a thousand years the statue laid broken. In 654 AD, the Arabs invaded Rhodes and they sold the statue.

Our drive took us by one of three golf courses in Greece. Mike promptly called it a “go 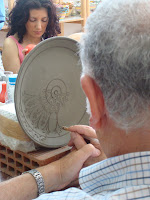 at track”. (That is not a compliment). Also, along the way, we stopped at a pottery manufacturer. We watched an artisan form a piece of pottery. Then we watch another artisan, actually the owner, make hand designs on the surface of a pot. Everyone working there seemed to be very talented. Driving on, we reached the city of Lindos. It is tradition that Paul landed in a small harbor in Lindos and stayed to do missionary work there. The text in Acts 21:1 does not support either tradition. It just says that Paul in Rhodes on his way to Patara. The port in Lindos is named St.Paul’s Bay. We visited this crystal clear water harbor that is protected by rock outcropping. T 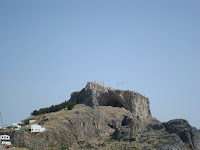 hen we stopped in the village, and climbed to the Acropolis of Lindos. When I say climbed, I mean climbed. It was some 300 steps up the side of a sheer cliff to the top. There were donkeys for people to ride if they couldn’t make the climb. We walked up. I made it without any trouble. At the top of the Acropolis which dates back to the ninetieth century, there were ruins of Greek temples, Roman temples, meeting places, and a palace. During the middle ages, there was also a Byzantine Chapel built by the Knights of St. John (these knights were crusaders that stayed in Greece after the crusades ended). After a couple of hours here we boarded the bus for the trip back to the Ancient Walled City of Rhodes. We took a quick walk thru the narrow streets and shops of the old city, and then stopped for lunch. Several of us went to the Romeo Restaurant where some had a traditional Greek dish and Mike and I had an oven-fired pizza with tomatoes, cheese and ham…delicious. The owner brought us some cold slices of watermelon as a gift! A wonderful treat. After lunch we did some shopping and walked back to the boat totally exhausted. 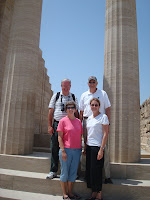