This morning ended our three day cruise. We had to have a wakeup call at 5:45a.m. because breakfast started at 6:00 and we had to be out of our rooms by 7:00. After making sure that all of the shipboard bills were paid, we were issued our passports, and disembarked the ship. Then we got our luggage, our guide met us, we loaded the bus, and we were off for a city tour of Athens. We drove by points of interest before stopping at the Acropolis. Our guide stopped several times along the way to give us information about the archeological site. At Mars Hill, we stopped to learn from the guide that Paul had preached at the location where we were standing. Allan read to us out of Acts 17, the passages that described the event. It was so sig 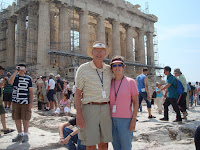 nificant that the very place where Paul was, so were we!
We were on our own to go to the top of the Acropolis where the Parthenon, Temple of Athena Nike, and the Erechtheum are located. It was very crowded at the top and there was no shade on the top. They are restoring the Parthenon so there were cranes and scaffolding 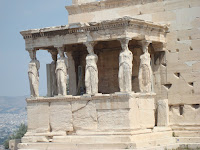 around it. It was interesting to see where new marble had been added to the original marble on the columns. We returned to the bus so we could be taken to our hotel that will be home for 2 nights.
Upon arriving at our hotel, we went walking with Dave and Libby. Along the way we stopped at an open air café for a lunch of turkey (for them) and chicken (for me) sandwiches with lettuce and tomatoes, potato chips and dip, and Coke. (Possibly the best meal we’ve had since we’ve been gone.) We then found an internet café where all of us were able to get on and check e-mail and send a quick post to the blog. Dave and Libby finished first and went on their way and when we were through, we walked to the Tomb of the Unkown Soldier where the Evzo 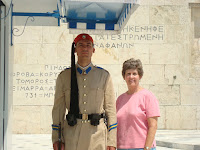 nes (which means presidential guard) group of soldiers are guarding it 24 hours a day. We were fortunate to be there when we were because it was time for the changing of the guard. We walked down into a subway station. While they were digging for the subway, they excavated a Roman cemetery and it is shown behind plexiglass. Graves from the 5th Century BC up to 1st century AD were shown. One of the graves had a skeleton that could be seen. We then worked our way back to the hotel and stopped by a beautiful elegant hotel, the National Library of Greece, a large department store and returned to our lunch café for a Coke. The people recognized us and gave us 2 chocolate covered doughnuts that were really éclairs. A great treat! We rested a while before dinner.
After dinner we went for a short walk again. Along the way we found an ice cream parlor, but didn’t buy any. Mike says look out tomorrow.
Posted by Mary Helen at 6/05/2008 09:28:00 PM