Marble is a natural resource in Greece and you realize that when the bathroom in the hotel has marble floors and walls! Of course, all of the floors in the lobby are marble as well.
Breakfast was at the hotel before we got on the bus to go to Corinth. There was a bus drivers’ strike today but we had the owner of the bus to be our driver. Our drive to Corinth was broken up by a rest stop at a canal built in the 1890s to connect the Ionian and Aegean seas. This canal is 4 miles long, the water is 24 feet deep, and 70 feet wide. The walls from the ground to the water are probably around 150 feet. The bus drove 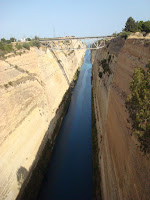 through the narrow streets of the village near the ruins that we visited. Our guide gave us important information about the life that went on in Corinth at the time that Paul was there. Allan read scripture to us before we had a group picture made at the site where Paul had preached.
Corinth holds a significant place in the life of Paul. The city had been on the map since the 10th century BC. By the time Paul arrived in 51AD, the city as it existed was only about 100 years old. The original Corinth had been destroyed in 146 BC by the Romans and rebuilt in 44BC by Julius Caesar. The city that existed when Paul arrived was a made up of a mix of d 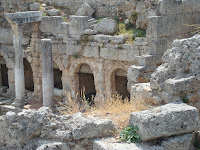 islocated individuals without strong ethnic identities seeking to better their lot in life. Paul made three visits to Corinth. He established the church in Corinth on the first visit, staying some 18 months. His second trip there was a result of a conflict in the church and challenges to his leadership. The third trip was made after the problems in the church were settled and the church had an offering for the Christians in Jerusalem. He received the offering and headed the delegation that carried the offering to Jerusalem. He never returned to Greece. 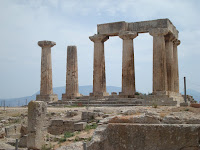 We had time on our own to take pictures at the site of the ruins before we drove to a restaurant on the canal for lunch. Mike had chicken on a skewer and I had a pizza with prosciutto, peppers and mushrooms. Very good.
The drive back to Athens took a little over an hour and several took advantage of the chance for a quick nap. We went for a walk with David and Becky around the area for 2 hours or so. Supper at the hotel was OK, but not great. I think that most people are ready for iced tea and American food. Some of the group took a walk after supper to go and get an ice cream a few blocks away.
We have a wakeup call for 12:30a.m., breakfast will be at 1:00a.m. and we leave for the airport at 2:00a.m. We fly to Amsterdam (3 ½ hour flight), wait for 3 hours, and then fly to Atlanta (9hour flight). We are to get to Atlanta around 1:30 p.m. and then we have a bus ride back to Cleveland.

It’s been a wonderful experience following the steps of Paul…the scriptures will come alive every time we read about what Paul did.
Posted by Mary Helen at 6/05/2008 09:49:00 PM