We enjoyed another great breakfast... 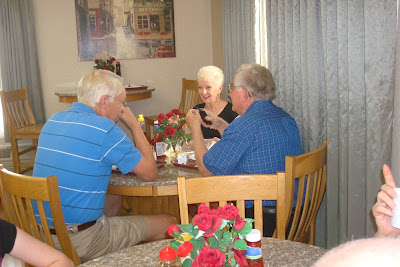 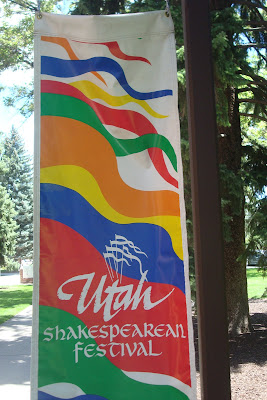 and then it was time to go back to the Festival where we joined many other patrons for the morning seminars. 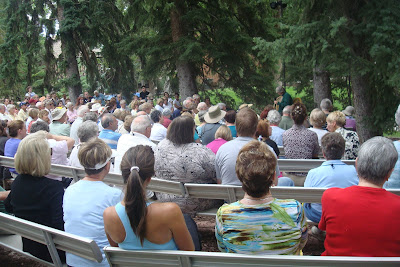 This morning we also had the Actors Seminar where these 2 wonderful actors came and shared with us. This is another of the many reasons that this festival is so unique...it really is one big happy family. 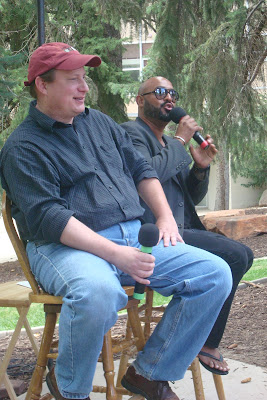 We had a quick snack before it was time for the afternoon orientation. On Wednesdays, it is held in the outdoor Adams Theater and it was already set up for tonight's performance of MacBeth. 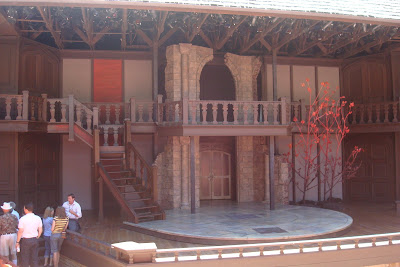 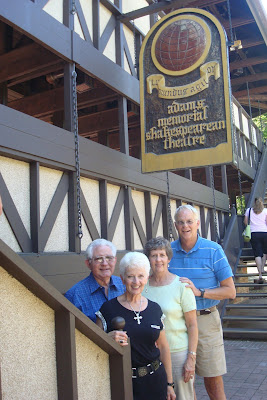 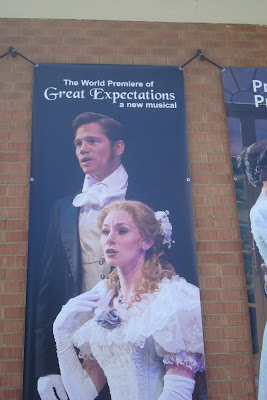 This afternoon we saw the world wide premiere of the musical Great Expectations. It is based on the book of the same name by Charles Dickens. It is a musical that deals with a young man's return home to England after he has spent 11 years in Cairo. The young man, named Pip, was flooded with memories in the form of voices and scenes from the past. The first memory is helping an escaped convict when he visited his parents grave. Next Pip becomes a companion to the wealthy Miss Havisham. When Pip is introduced to Miss Havisham, he finds her dressed in an ancient yellowed wedding dress; a dress she has worn since being jilted and left at the alter on her wedding day years ago. Pip quickly falls in love with Estella, Miss Havisham's adopted daughter. Unfortunately, Estella has been raised to hate men so he gets nowhere with her. After a few years, his life suddenly changes when he learns that he has a secret benefactor and that he is going to be educated as a gentlemen with "great expectations." He soon becomes embarrassed of his past, overspends his allowance, and participates in the social circles of the upper class. He, For all practical purposes, bombs out of his training and returns home and the play returns to the current time. He sees his former flame Estella, who has lost all her fortune. They speak and and look longingly at each other but seem to go their separate ways as the play ends.
Of course, it was time to eat again! Today we decided on Mexican food which was good. 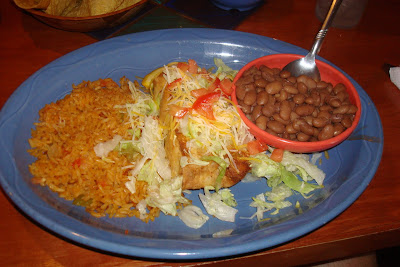 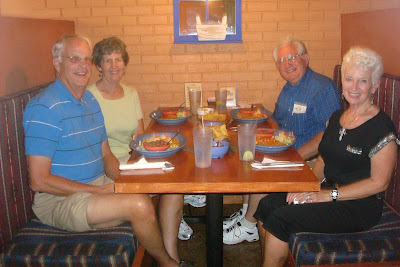 Back to the hotel to "freshen up" which really means...brush your teeth. And then back to the evening orientation . 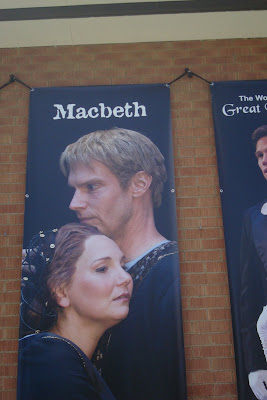 The evening play was MacBeth, or as actors call it, The Scottish Play. It starts as Macbeth and Banquio are returning from a very successful military campaign where MacBeth fought with great valor. On the way to see the King of Scotland, he encounters three witches who tell him three prophesies about his future. One, that the king will bestow on him a higher ranking in the king’s court. Two, that he will become the King of Scotland, and three, that Banquio’s heirs would be the future kings. MacBeth does not believe them, but Sure enough, upon arriving at the king’s palace, the king gives him the higher rank. This causes him to wonder about the other predictions about him becoming the King of Scotland but the succession to the throne would not come from his family, but instead the family of Banquio, another high ranking officer of the court
Once he arrives home, his wife, Lady Macbeth, has already set her sights on becoming the queen and develops a plot to kill the king when he visits their castle a little later. On the night of his arrival to Macbeth’s castle, Macbeth kills the king while he is sleeping. The king’s sons, the rightful heirs flee the castle and MacBeth is crowned king as predicted by the witches. Soon after ,he orders the death of Banquio and his heirs.

Macbeth soon gives a great dinner for his court and just as he sits down at the table, he alone sees the ghost of Banquio, who disrupts the banquet an makes the members of the king’s court wonder about the death of the original king and MacBeth’s fast rise to be king. One valued supporter of MacBeth, Macduff flees to England.

MacBeth is insecure in his power so he consults the witches again about his future. Much to his pleasure, they tell him he cannot be killed by someone born of a woman nor will he die until the Birnam Wood, a medieval forest, comes to his castle. He now sees himself as invincible even though he is haunted more and more by the ghosts of those he has ordered killed. In a fit of rage he orders the family of Macduff to be killed.

While all this is happening, Lady MacBeth, becomes completely overcome with grief , remorse, and the enormity of what they had done. She dies, probably at the own hand. Macduff marshalls an army from England and marches on MacBeth’s castle. To hide the advance of the soldiers, Macduff orders his army to cut branches from the trees of Birnam Wood to camouflage their advance. MacBeth’s confidence is shaken when he remembers the prophesy of the woods advancing on his castle, but he knows he cannot be harmed by any man born of woman. During hand to hand combat between MacBeth’s forces and Macduff’s, Macbeth learns that Macduff was born by cesarean section, not a normal birth. MacBeth realizes that he is doomed, but fights to the death. Macduff kills him and announces that Scotland is free from Tyranny.

Ejoyed the report of your happenings-reading this in South Dakota. Guess you will beat us home. Sounds like you are having great fun.

That's a big crowd at your seminar. It sounds like another wonderful week for you.