After breakfast at the hotel, we drove to Dunedin where we drove thought their historic town. We then went to Honeymoon Island and walked on the northern most part of the beach that was all shells, no sand. 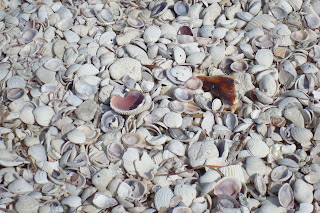 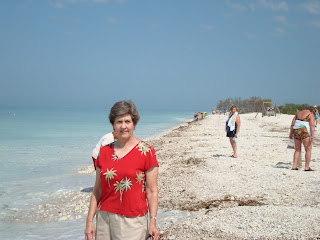 We tried to take the ferry to Caladesi Island, which has been named the #1 beach in the US, but it didn't work out for us. The noon ferry had just left and the 12:30 ferry was sold out so it would have been 1:00 before we could have gone to the island. Instead, we went to another beach on Honeymoon Island, rented chairs and an umbrella and got to use them for 2 hours. This gave us plenty of time to read and take naps! 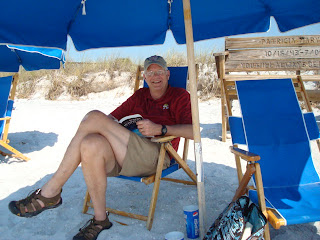 When our time was up, we drove back to Tarpon Springs and went to the Greek Orthodox Cathedral...a beautiful and ornate facility. 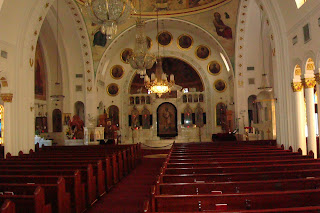 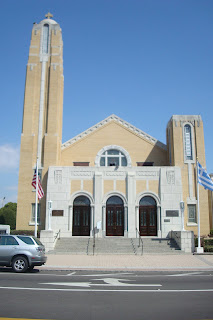 We noticed on the top of the bell tower, there was an osprey who had a fish up there. Not sure if it was breaking off pieces for babies or for itself. But it was interesting to watch. 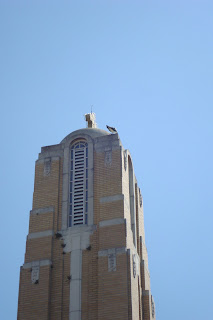 We stopped for supper at Cody's...yes, that's where we ate last night. We were eating around 3:45 p.m...we may be the Seinfields but we did not have on white tube socks or white tennis shoes with velcro! Mike had a steak with a baked potato and I had some steak bites with a baked sweet potato.

After we got back to the "resort", we were able to get in a round of golf. 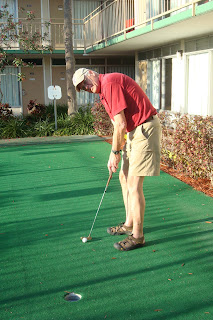 It's going to be an early night for us because we have a 7:40 a.m. flight back to Tennessee. This has been a fun few days...especially the warm weather which we may not have when we get back home.

Thanks for coming along with us.

I had so much fun reading all about your trip. Matter of fact I am such a shell lover I need to learn more about where this all shell beach was. Sounds like you guys had a great trip- yes, it is freezing here in the great state of Tennessee! Be safe.

In 1977, I lived in Tarpon Springs - - - just a few blocks from that Greek Orthodox Church. I worked in Clearwater Pointe for a while and drove through Dunedin on a regular basis. It is a gorgeous area. - - - - and at that time, W.T. Grant was still in business because I worked in their office in Tarpon Springs paying invoices. There used to be an EXCELLENT restaurant called Fat Boys' Barbeque just north of Tarpon Springs - - - don't know if it's still there or if it's still as yummy. Greek Town is really neat.