The Canyons and Mesas of Utah

This morning we had a good hot breakfast buffet of eggs, sausage, hash browns, cereal, toast and pastries. It was a nice change from the previous one we had. While at breakfast, we learned that in Farmington, where we stayed, they had just finished hosting the high school national rodeo finals…so many people in starched jeans and cowboy hats that you would have thought were in Texas!
As we drove through the Navajo Nation, we saw many of he things mentioned in Tony Hillerman’s books…chapter houses, hogans, and even Shiprock. We saw such beautiful landscapes and geological formations along the way. We had great conversation and laughter as we drove. 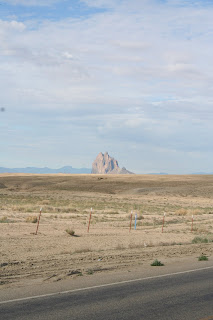 We stopped for gas,$3.02/gallon, since we didn’t know where the next opportunity would be and began an adventure. We turned on the road to take us to Utah and we knew the adventure was about to begin when we saw the sign that read…no RVs, no towing vehicles, nothing over 10,000lbs. The next indication was a sign that said we would be on a gravel, unimproved road with a 10% grade for the next 4 miles. Wow! The views were great and the road was too narrow to pass another car! We climbed about 2000 feet to the top of the mesa. The trip down the other side was much flatter and paved…thank goodness. 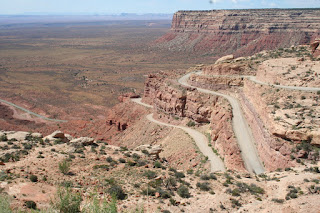 The National Bridges National Monument was our next stop. This is the largest concentration of natural bridges in the world. Our driving tour took us by 3 of them. 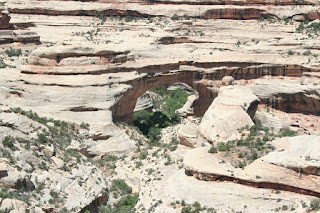 We had a picnic of cherries, pineapple, strawberries, and nuts before we got in the car for more driving. We crossed the Colorado River and saw more beautiful scenery. One of the named formations that we saw was Jacob's Chair. 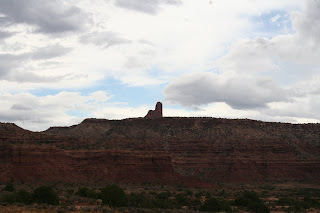 We stopped for gas and snacks at a unique convenience store...it was inside a dugout rock! 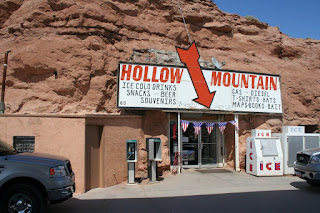 We stopped by the Capitol Reef National Park visitor's center and enjoyed their movie about the park. This park has a beautiful landscape of multi-hued rock layers. It goes north and south in the heart of the Utah canyon country some 60 miles long. This area was used by early Indians to the days of Mormon pioneers before it was turned into a national park.
The drive to Escalante,Utah, where we will spend the night, was another exciting adventure as we drove through canyons and mesa tops. Included were narrow roads with cliff drop offs on both sides and multiple 14% grade elevation changes. A little scary! While we were driving through the Dixie National Forest we saw many mule deer that were grazing near the road...one even crossed the road right in front of us.
We checked into our motel and then went for dinner at Cowboy Blues...good food.
Posted by Mary Helen at 7/26/2009 11:19:00 PM

I don't do heights well at all. On the road with the cliff drop-offs, you would probably found me curled up on the floor in the backseat - -- - praying harder than I had ever prayed before in my life!

You are too funny! Thanks for reading.