We were able to order breakfast this morning...choices of eggs, French toast, waffles, meat and any combination of those. Muffins, fruit and cereals were available to get as well as juices. 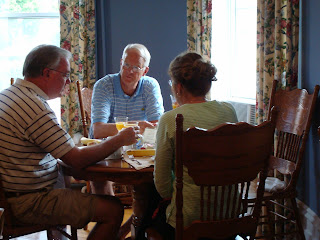 We drove from Antingoish toward Cape Breton stopping at a visitors center as we entered the island. we learned about a quilt show in a nearby church so we stopped by for a quick look. There were many beautiful quilts on display there...many of them for sale. We saw ladies quilting for mental health patients, a Tennessee Waltz quilt, and a quilt made for the closing of United Churches. That was so sad for us to hear that when churches close, they have a ceremony to commemorate the occasion and they have this quilt on display and they close the doors on the quilt as well as the church. 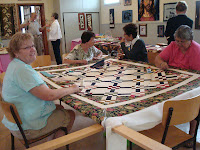 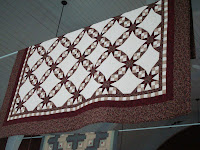 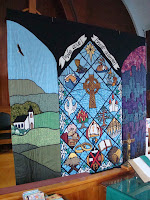 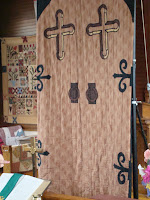 After the quilts. it was on to Fort Louisbourg which was about 2 hours away. We arrived at Fort Louisbourg in time to make a walking tour that was led by a very entertaining guide. The fort was built by the French in 1713. It remained under French control until 1745 when the British captured it after a 6 week siege. The British gave the control of the fort back to the French in 1749 as a result of a treaty. In 1758 British forces again captured the fort and France cedes New France (Canada) to the British by the Treaty of Paris. Historians say that if the French had not lost Fort Louisbourg in 1758, Canada would still be French. 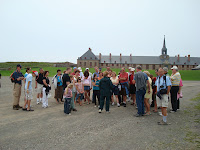 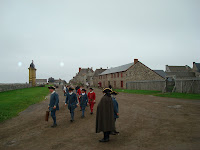 The costumed workers in the various houses and around the fort spoke only as if they were in the period. All of them could speak English and French. We learned so much from them about life during that time. We also saw them shooting the canon as they would have done to protect the fort. 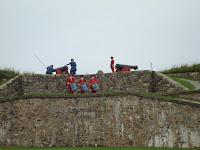 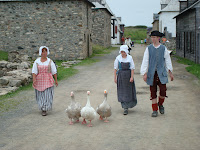 Near the end of our time at the Fort, it began raining and we made our way back to he bus that took us back to the visitor's center and our car. We drove to the modern town of Louisbourg where we ate supper at the Grubstake Cafe...great food. The trip to Baddeck took about 1 1 /2 hours to get here. After checking into the hotel, we went for ice cream before calling it a night.
Posted by Mary Helen at 8/14/2008 09:06:00 PM