Tuesday on Wednesday, the real thing

(Mike got the computer to work tonight!)
On Tuesday, we were supposed to play golf but it was raining so we nixed the original plans. Breakfast at the B&B was wonderful. We walked around the historic area of Shelbourne and saw many houses that were built in the 1700s. The harbor was so peaceful that you can see why people enjoy living there. It is almost a ghost town in the winter months. We then took a driving tour of the area and saw an airfield that had been the location of airplanes that protected the North Atlantic ports from German Uboats. A lighthouse was next and it was called Sandy Point Lighthouse because at low tide you can walk out to the lighthouse, but don't get caught out there when the tide comes back in! We stopped at a fishing village and talked to a fisherman who lives there and we talked about his vocation...very interesting. While he enjoys his fishing of lobster, haddock, and swordfish, the rules and regulations have made it much harder for him to make a living. He made more 20 years ago than he does now.
After lunch, we stopped at another lighthouse and then at a old woolen mill that was in operation until 1962. Mike was really interested in the mill drive train. The whole mill, all three floors full of equipment were driven by one water wheel and a series of flat belts off a single drive train. There were 500,000 sheep in area and most of them were kept on nearby islands to protect them from predators. 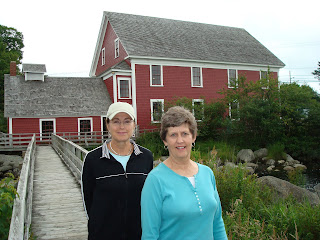 We then drove thru Yarmouth, saw a lighthouse,and headed on toward Digby, the day's destination.
We stopped at more lighthouses along the way and also a Catholic church that is the World's largest wooden church made completely of wood.. It has a spire some 185 feet tall. The Church was closed so we could not go inside. 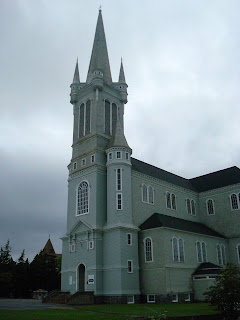